Diving For A Dumpster - Ramsey Winch - Be Mighty
| No Comments

Ron Arrowsmith founded Arrow Towing in 1975. Ron’s son Brad has been the sole owner since 2004.
Arrow has served Omaha, Nebraska, and the Council Bluffs, Iowa, metro area for more than 40 years.
Tony Carr has been the operations manager for Arrow since October 2009.

The Volvo dump truck had traveled through a dirt berm, down a 45‐degree slope, and broke through
more than a foot of ice. The cab was estimated to be approximately 20′ below the surface. The truck
was found with only a foot of the dump body above the surface. The ice around the truck was cleared
with the large excavator on scene.

A similar truck was at the scene, so a briefing was held with all personnel covering the hookup points
and rigging plan. Once a plan was in place, communications were connected, divers were suited up and
the underwater work began. The dump was rigged by divers from the Yutan, Nebraska, and Denison,
Iowa, fire departments.

“Once the first diver entered the water, the entire eight‐part (two four‐parts) initial layup was rigged in
33 minutes,” Carr said. “Thirty‐three minutes, no kidding, and the ease of rigging was due to the
synthetic rope (and skilled divers); no doubt about it. Due to previous experience with steel rope, I
anticipated three to four hours of rigging.”

The ends of each rope were terminated to a deadman on each side of the 60‐ton Jerr‐Dan rotator, but
all winching was done with it.

“As the unit came out of the water, the resistance increased dramatically, with the truck now estimated
at 200,000 pounds with the additional water,” Carr said. “The layup was changed to two five‐part lines,
adding to the anchoring on the deadmen.”

Once the undercarriage of the truck was accessible, the crew disabled the parking brake to continue the
winch‐out. As the cab came out of the water, it became apparent that it was rolled onto its side. An
excavator was rigged to upright the cab as the rest of the unit was pulled up the embankment. The unit
was recovered far enough from the embankment to allow fire crews to complete their recovery work.
After it was out of the water, the deceased operator was extricated. The casualty wasn’t transported; it
was left for Mine Safety and Health Administration to investigate.

“First off, I relay this with the utmost respect to the deceased and his family,” Tony said. “This job was a
very complex and difficult recovery. The conditions were very cold and windy and the water temp was
around 32 degrees. We worked with multiple agencies on this recovery, some we’d worked with in the
past and some new. The teamwork was fantastic.

“This is probably one of the most involved recoveries of my career,” Carr said, “and I wanted to get it
shared. The synthetic rope and Ramsey winches on my Jerr‐Dan worked very well. If there are any
doubts to the strength of any of them, I would assume this would alleviate those concerns.” 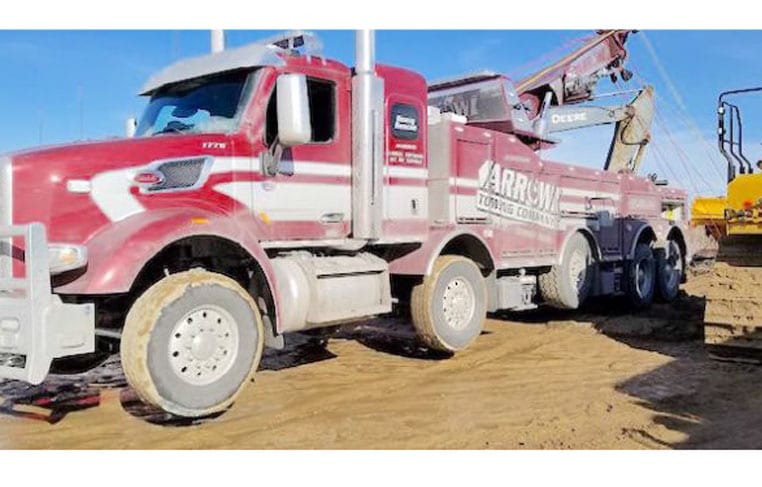